My first wearable project – a bag with motion controlled LEDs

As my godchild is approaching her 18th birthday and i wanted to have something special for her i decided to sew a handbag (basically for her Mac-Book) – of course with electronics inside!

I started with the Adafruit Gemma, the smallest wearable computing component they offer. I wanted to combine it with a Motion-Sensor (LSM303) over i2c so that the LEDs are flashing when the bag is moving. Gemma officially supports i2c, but after some first problems i found a note on Adafruit’s website that Gemma is not supposed to run complex projects but rather just flash some LEDs etc. – additionally Gemma does not have a serial port which makes it quite hard to debug. I sewed with conductive thread which easily can be used instead of normal thread in the sewing machine. It is important to follow the tips and tricks for sewing electronics.

So i switched to the slightly bigger Flora-Platform which has a Serial-Port for debugging and a straight support for i2c. Connected everything and it worked fine – except for some problems when the bag was moved in certain directions. I figured out that the connections that i had sewed with conductive thread were shaky – so i first tried to solder the thread, but that did not solve the problem. I had to wire the i2c with real wire – now everything is stable even under “tough” conditions. 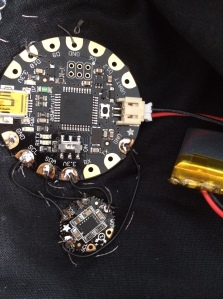 stephannoller.eu
View all posts by holadiho →
This entry was posted in Wearables and tagged Adafruit Gemma. Bookmark the permalink.